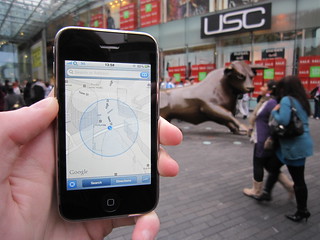 According to recent research, there are now more mobile phones in the UK than people and the number of people using Smartphones to search the internet is doubling every two months. It is predicted that in three years time the sale of Tablets will be larger than PC sales. 38% of UK tablet owners spend more time on their tablet than watching TV.

With this massive explosion in mobile internet usage, it comes as no surprise that Google have recently launched their new Google Analytics mobile app.

Amanda DiSilvestro from Highervisibility explains that it is no secret that analytics are key when it comes to developing a great mobile app. You want to know who is using your app, how long these people are reading a particular article, which aspects of the app are getting the most traction, and at what times and through what outlets these people made it to a certain webpage. Once you have all of this information gathered, you can analyze the information and improve your app based upon what really works for your audience. The best way to make this happen is, of course, Google Analytics.

Until just last week Google Analytics were available only on the desktop. After much anticipation, Google finally decided to make this information mobile by creating a set of reports now available through the Google Play store.

The tool called Mobile Apps Analytics is a bit more interesting. This app was designed to help put mobile app data all in one place using Google Analytics. Below are a few features and benefits that both of the apps will offer:

…More at A Look at Google Analytics Mobile App | HigherVisibility

Mashables Todd Wasserman explains what he believes is the motivation for launching the new Google Analytics mobile app:

Google’s motivation for providing such analytics for mobile is obvious: For the first time, customers began spending more time on mobile apps than the web last year, according to Flurry Analytics. Google itself is also putting more of its R&D behind mobile as evidenced by the introduction of Google Glass and the Nexus 7 Android tablet. However, this is a case in which Google’s role as an information provider trumps its mission to spread Android products. Since Google is providing metrics for iOS as well as Android, the company is in theory helping Apple app makers as much as it is helping Android developers. (The one gap in Mobile App Analytics is for referral traffic; such information isn’t available for iOS apps.)

One possible end game for Analytics is that Google will get developers to become so dependent on the information that they will at some point be able to charge for it. At the moment, though, there is no charge at all. There’s not even a premium version. Says Wang: â€œWe really want to make [Mobile App Analytics] available and make it helpful for marketers to have the end-to-end information. We wanted to make sure we didn’t only focus on the platform we own to help them make the best decisions….More at Google Analytics Comes to Mobile Apps

It remains to be seen if the idea of using a mobile device to research your visitor traffic will become popular. Although I can appreciate the convenience of being able to track responses to my latest Google Adwords campaign whilst on the move, for any heavy duty analytical research, I think I would still prefer the convenience of my desktop PC and wide screen monitor!

To find out what people are saying on Twitter about this new app, please view the following Tweets:

If you found this website analysis post helpful, why not subscribe to my Blog by RSS Feed or Email and receive free Professional SEO Tips and Internet Marketing information, direct to your in box.